The contractions began when Kristen Miller was attending a February church service.

By the time she got home, the Jefferson City, Tenn., her water had broken and she knew her baby was in trouble.

Miller was only 22 weeks pregnant at the time.


"She called me hysterical," her husband, Ian Miller, reported.


Doctors were able to hold off delivery for more than two weeks, allowing baby Micah to remain unborn beyond 24 weeks, the earliest that doctors say a premature baby can survive outside the mother's womb. Surrounded by a small army of hospital staff, Micah arrived on Valentine's Day and weighed just over a pound.


A premature birth would have been stressful enough on the Millers, but there was another serious complication to consider: Micah was not alone. He had a twin sister nestling inside his mother's womb.


Kristina Shumard, an obstetrician at UT Medical Center specializing in maternal-fetal medicine, knew that the longer she could keep Micah's twin sister, Madelyn, inside her mother's womb, the healthier and safer the baby would be. And yet, when Micah was born, Shumard knew the odds weren't in Madelyn's favor. She expected Madelyn to arrive within an hour of her brother's birth.


The doctor was determined to delay Madelyn's birth as long as possible.


"Just because we're having one [baby] doesn't mean we have to have the second or the third," Shumard said. "But it's hard to find the person who's a really good candidate."


Babies born about 24 weeks into a pregnancy have a survival rate of about 50 percent and those who do survive are at risk for complications, according to Sabrina Craigo, the chief of maternal-fetal medicine at Tufts Medical Center. Craigo, a Tufts Medical Center news release explains, was involved in the birth of a pair of twins born 24 days apart in 2014. The release explained some of the challenges faced by the mother, the children and the doctors.


"This rare technique can only be performed with fraternal twins who have their own amniotic sac and don’t share a placenta. Additionally, it’s vital that the mother’s contractions subside following the birth of the first baby for delayed interval delivery to be successful. 'I've seen two others in my career thus far, I think


the longest interval between deliveries has been seven days at most,' Neonatalogist Gina Geis, MD said in an interview with WHDH-7."


The release noted that Tufts doctors said that in most cases, only a few days separate delayed interval deliveries. Referring to the case in 2014, Errol Norwitz, chairman of the obstetrics department at Tufts, said it was the third case of a delayed interval birth he had seen in 25 years of practicing medicine. In the previous two pregnancies, he said, the first baby did not survive.


The Millers faced some of the same challenges, but luckily their twins had separate sacs and placentas. Doctors say that every single day of delay counts for a baby about 25 weeks old and that even one solid week can offer the child valuable health benefits.


"We said, 'Yes, if there's anything you can do to keep one of them in longer, we want to do that,'" Ian Miller said. "They all said, 'Yes, it's possible,' and hinted that it was unlikely."


Doctors demanded that Kristen Miller get strict bed rest and forbade her from even holding her newborn son for three weeks, according to WBIR.


Knowing that the odds were stacked against the Millers, UT Medical Center's director of obstetrics told the station, doctors cautiously attempted to provide the family with realistic expectations for success.


And yet, to everyone's surprise, director Kimberly Fortner said the mother "kept doing better each day."


"And we just kind of all looked at each other and said, 'Okay, another day it is,'" Fortner said.


Five and a half tense weeks later, Madelyn was born, WBIR reported.


Doctors told the couple that theirs was the longest interval delivery they could remember at UT Medical. The world record — twins born 87 days apart — was set in Ireland in 2012, according to the Irish Times.


"I don't know that we've broken national records, but it certainly felt like such a coup for all of us," Fortner said. "It's been amazing and exciting!"

The Miller family will spend the next two months at the hospital as their twins grow healthier. Madelyn is breathing on her own and remains in the same room as her brother.


“We feel so blessed to be here,” their mother said. 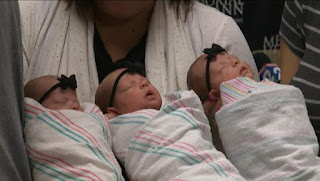 HOUSTON -- Parents of a rare set of identical triplets are welcoming the babies home, a month after the three little girls were born at a Houston hospital, CBS affiliate KHOU reports.

The triplets are named Addison, Savannah and Kinsley and their parents are still a bit overwhelmed.

"Just triple of everything," said Stephanie Harris, the children's mom. "They sit there. They make the same noises. They do the same thing. They have their own language."

During an early ultrasound, the doctor initially said they were expecting twins.

"And they were in the same placenta, and so she automatically knew that they were going to be identical," Stephanie Harris said.

A few weeks later, she came back for a follow-up ultrasound. That's when the


doctor delivered the unexpected news, telling Stephanie she was having triplets.

Stephanie's mother Lynn Sweatt was with her during that appointment.

"And when she said that there was a third, her arm went over her head and I'm saying, 'It will be OK. It will be OK,'" Sweatt said.

The girls were born on Dec. 1, 2015, 10 weeks premature, weighing about three pounds each. Their parents have come up with a color-coded system to help tell them apart.

"We got ankle bracelets, and we're going to color coordinate them," Stephanie Harris said. "Hopefully, we don't get them mixed up."

While identical triplets are extremely rare -- doctors say about one in a million births -- these girls do have some company. At least four other sets of identical triplets were born in the U.S. last year, in Maryland, New York, Pennsylvania, and Montana. 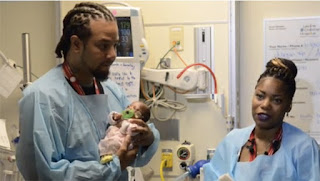 E’Layah Faith Pegues was born on Sept. 23 and weighed just 10 ounces. On Dec. 29, her original due date, her parents held a news conference at the Carolinas Medical Center’s Levine Children’s Hospital, where the now 3-month-old holds the record for the smallest surviving baby born at the hospital.

Story: How One ‘Miracle’ Baby Beat the Odds After Being Born at 25 Weeks 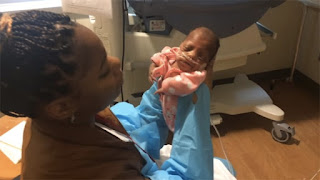 Now weighing in at 3 pounds 10.7 ounces, E’Layah is doing so well that Smith and her fiancé, Eric Pegues, expect their very little girl will be able to leave the neonatal intensive care unit, where she has been living, and go home in the next week or two.


It’s a truly remarkable New Year’s gift for the Charlotte, N.C., couple, who have been concerned about their daughter’s health since before she was born. Smith suffered two strokes, high blood pressure, and rough morning sickness while pregnant with E’Layah. And when Smith’s obstetrician observed in August that the baby wasn’t growing, the doctor put the mother-to-be on bed rest.

A month later, after E’Layah had stopped moving, doctors decided it was time for an emergency cesarean section delivery and prepared Smith and Pegues for the worst. “[But] we just weren’t taking it,” Smith told Fox 8. “We said, we have to have faith, and that’s when we made her middle name Faith, because we weren’t going to give up on her.”

That’s why today they are so thrilled to report that thanks to a combination of formula and breast milk, and NICU doctors’ care, E’Layah is not just surviving but thriving. And instead of hoping for her to pull through, Smith said, “We pray for her strength.”

Omo Franca
I'm a professional proofreader, writer and researcher with a special interest in fertility and wellness.